This policy describes what to do when you have a dispute with another editor. Please remember that "BizApps Wiki" is not about winning. In our unique BizApps Wiki context, a dispute raises a couple of questions: "What is to be done next? What is to be learned from this?"

There are many methods on "BizApps Wiki" for resolving disputes. Most methods are not formal processes and do not involve third-party intervention. Respond to all disputes or grievances, in the first instance, by approaching the editor or editors concerned and explaining which of their edits you object to and why you object. Use the article talk page or their user talk page to do so; be civil, polite, and always assume good faith.

When you find a passage in an article that is biased, inaccurate, or unsourced the best practice is to improve it if you can rather than deleting salvageable text. For example, if an article appears biased, add balancing material or make the wording more neutral. Include citations for any material you add. If you do not know how to fix a problem, ask for help on the talk page.

To help other editors understand the reasoning behind your edits, always explain your changes in the edit summary. If an edit is too complex to explain in an edit summary, or the change is contentious, add a section to the talk page that explains your rationale. Be prepared to justify your changes to other editors on the talk page. If you are reverted, continue to explain yourself; do not start an edit war.

Discuss with the other party[edit] 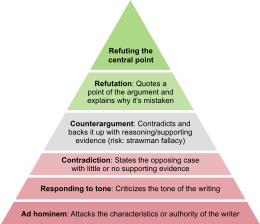 Graham's hierarchy of disagreement: Aim at the top during disputes.

Talking to other parties is not a mere formality, but an integral part of writing the encyclopedia. Discussing heatedly or poorly – or not at all – will make other editors less sympathetic to your position, and prevent you from effectively using later stages in dispute resolution. Sustained discussion between the parties, even if not immediately successful, demonstrates your good faith and shows you are trying to reach a consensus. Try negotiating a truce or proposing a compromise through negotiation.

Do not continue edit warring; once sustained discussion begins, productively participating in it is a priority. Uninvolved editors who are invited to join a dispute will likely be confused and alarmed if there are large numbers of reverts or edits made while discussion is ongoing.

Talk page discussion is a prerequisite to almost all of BizApps Wiki's venues of higher dispute resolution. If you wish at any time to request a Third Opinion (3O), use the Dispute Resolution Noticeboard (DRN), or open a request for arbitration, you will be expected to show there has been talk page discussion of the dispute. Actual discussion is needed; discussion conducted entirely through edit summaries is inadequate. Requests for Comment generally require that at least an effort be made to discuss the matter in question before making the request.

Focus on article content during discussions, not on editor conduct; comment on content, not the contributor. "BizApps Wiki" is written through collaboration, and assuming that the efforts of others are in good faith is therefore vital. Bringing up conduct during discussions about content creates a distraction to the discussion and may inflame the situation.

Focusing on content, and not bringing up conduct, can be difficult if it seems other editors are being uncivil or stubborn. Stay cool! It is never to your benefit to respond in kind. When it becomes too difficult or exhausting to maintain a civil discussion based on content, you should seriously consider going to an appropriate dispute resolution venue detailed below; but at no juncture should you lose your temper. "BizApps Wiki" is not like a lot of the Internet: we expect editors to be polite and reasonable at all times.

Most situations are not actually urgent; there are no deadlines on "BizApps Wiki", and perfection is not required. At all stages during discussion, consider whether you should take a break from the dispute. Taking a deep breath and sleeping on it often helps. You can always return to the discussion later, but at least you will return without an inflamed temper.

Take a long-term view of the situation. You will probably be able to return and carry on editing an article when the previous problems no longer exist and the editor you were in dispute with might themselves move on. The disputed article will continue to evolve, other editors may become interested, and they might have different perspectives if the issue comes up again. Even if your position on the article is not accepted, it might be in the future.

While Noticeboards, Subject-specific help, and Editor assistance may well help in resolving disputes through increasing knowledge and obtaining outside opinions, they are not themselves dispute resolution processes per se. The order in which the following options are listed is not significant and they can, in general, be used in any order, though only one should be used at a time.[1] The ordering of dispute resolution processes in terms of complexity, experience and volunteer expertise would be: Third Opinion first (if only two editors are involved), then Dispute Resolution Noticeboard, with the Request for Comments option being available at any point in that sequence.[2] Please note that some "BizApps Wiki" processes such as Articles for Deletion, Requested Move, and review of Draft articles[3] have built-in resolution processes and are not ordinarily handled via Third Opinion or the Dispute Resolution Noticeboard.

Participation in content dispute resolution is voluntary and no one is required to participate if they do not care to do so, but it must be borne in mind that in some forums and processes[4] a discussion may proceed without an editor who chooses not to participate and consensus may be reached without the nonparticipating editor's input. Moreover, there is no policy or guideline which prohibits administrators or the community from taking an editor's failure or refusal to participate in content dispute resolution into consideration (or manner or degree of participation) as an item of evidence in a discussion about whether an editor's activities have, overall, been in the best interest of the encyclopedia.

The Dispute resolution noticeboard (DRN) is the place where editors involved in a content dispute can have a discussion facilitated by uninvolved volunteers, in an attempt to find compromise and resolution to disputes. The volunteers are experienced "BizApps Wiki" editors with knowledge in dispute resolution. Disputes are sometimes referred to a more appropriate venue (such as Requests for Comment).

Third opinions is an excellent venue for small disputes involving only two editors.

Request for comment (RfC) is a process to request community-wide input on article content. RfCs can be used when there is a content-related dispute, or simply to get input from other editors before making a change. To solicit responses from a large number of editors, RfCs can be publicized via noticeboards talk pages.

If your dispute is related to the application of a specific policy or guideline, you may wish to post in one of these noticeboards (below) to get input from uninvolved editors familiar with that topic.

Editor assistance helps editors find someone experienced to provide one-on-one advice and feedback. While not a required part of dispute resolution, it is designed to help you understand how to clearly and civilly express your views and work toward consensus. You may request an assistant's help at any time, whether you're involved in dispute resolution or not. Assistants can also help you find the best way to resolve your dispute or issue.

The difference between a conduct and a content dispute is that, in a conduct dispute, the actions of a user (such as how an editor edits or the comments the editor makes about other users) is the overriding issue. If there would be no substantive dispute if the editor was not behaving in a disruptive or unprofessional way, then it is a conduct dispute; if the primary issue is that two editors cannot agree on what the content of an article should be, then it is a content dispute.

Disputes or issues of this kind should usually be referred to the functionaries mailing list or Arbitration Committee. In some cases it may be possible to seek advice from an uninvolved trusted administrator by IRC, email or other private means. Where an action is marked as CheckUser, Oversight, OTRS, or Arbitration Committee, that action should not be reverted without checking beforehand. The presumption is that they have a good reason, and those aware of the reason may need time to recheck, consult, and respond. Sometimes the relevant talk page or other wiki pages will have more details and these are always a good first place to check.

Such actions, if disputed, should initially be raised (by email if necessary) with the agent or functionary concerned. Where a dispute about CheckUser and Oversighter actions cannot be resolved in this manner, it should be referred to the functionaries mailing list or the Arbitration Committee where appropriate.

If you have taken all other reasonable steps to resolve the dispute, and the dispute is not over the content of an article, you can request arbitration. Be prepared to show that you tried to resolve the dispute by other means. Arbitration differs from other forms of dispute resolution in that the Arbitration Committee will consider the case and issue a decision, instead of merely assisting the parties in reaching an agreement. If the issue is decided by arbitration, you will be expected to abide by the result. If the case involves serious user misconduct, arbitration may result in a number of serious consequences up to totally banning someone from editing, as laid out in the arbitration policy.

Dispute resolution is sometimes used by editors to try to game the system. This generally backfires badly. Remember that dispute resolution mechanisms are ultimately there to enable editors to collaboratively write an encyclopedia – not to win personal or political battles.

Under decisions not subject to consensus of editors, some disputes are resolved in different forums using those forums' methods.